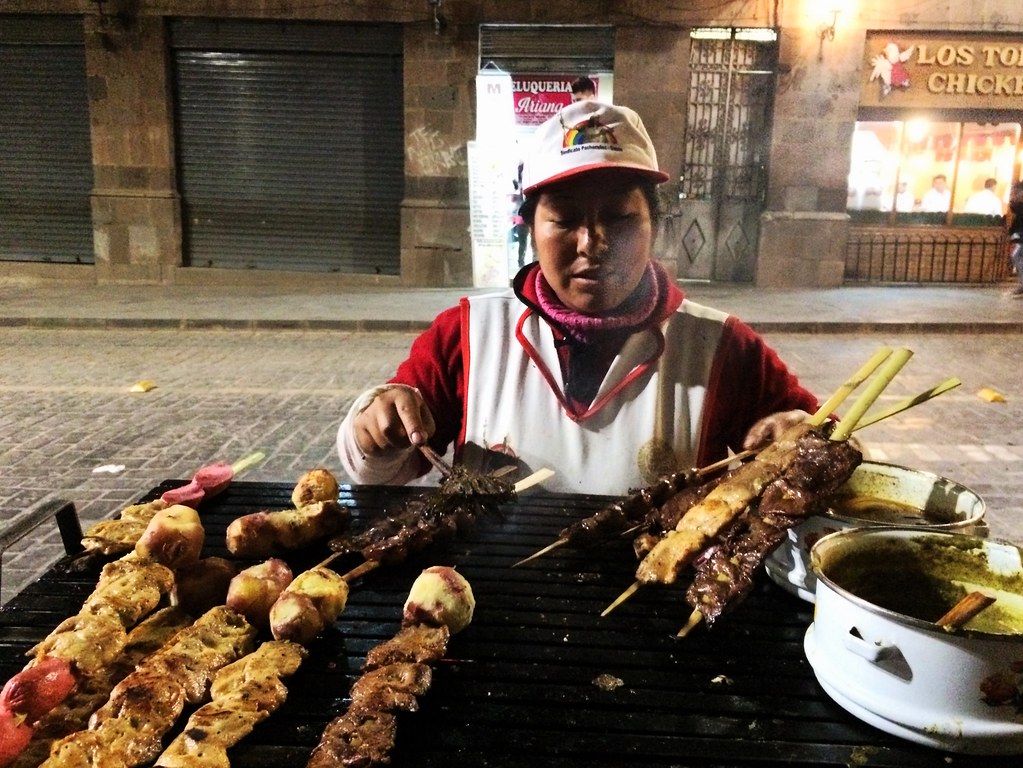 Chica Morada
The chicha Morada is a drink from the Andean region of Peru. However, now its consumption can be found at a nacional level. Its history and consumption
reaches back to the pre-Hispanic era. It’s the drink of the Incas, made from purple corn.

#5 TamalesTamales
Although it they are popular in Mexico, tamales are also important in Peruvian cooking. According
to ancient records, tamales came to Peru by the way of African slaves. It can be eaten sweet or unsweet
with meat.

#4 Huevos de Codorniz
Quail eggs are characterized by their size and brown/blue color. They are like a glass of milk: they are very nutritious.
They contain vitamin A,B,C,D,E, and other minerals.They are also low in cholesterol.

#3 Anticuchos
It’s a pre-Columbian tradition that can be found on most street corners in Cusco. The term is derived from the Quechua language
antikuchu, anti=Andes, kuchu=cut. In 2005, the Association of Anticucheros presented the largest anticuchu in the world. It was
considered by the Guinnesss Book of World Records.

#2 Queso Helado
Dessert of the gods! But it doesn’t contain cheese, it has the ingredients of cheese.It’s made from a mixture of milk, cocoa, vanilla and after cinnamon and cloves are sprinkled on top. It can be found on Avenue Cultura.

#1 Churros
FOOD OF THE GODS! Churros are the most popular of street foods, and the best. They are made from fried dough rolled in sugar. The best in Cusco
can be found at the intersection of Matara and Meson de la Estrella.

« Bike to the Land of Unique Terraces

The Sacred Valley of the Incas »