The Sacred Valley of the Incas, located between the towns of Pisaq and Ollantaytambo, was very valuable during the Tahuantinsuyo times for its geographical and weather characteristics that favor the production of the best corn in Peru. Crossed by Vilcanota River, it is one of the most visited places by tourists as it includes de archaeological sites of Sacsayhuaman, Qenko, Tambomachay, Moray, and Ollantaytambo. Its handicraft markets in Pisaq and in Chinchero are also well known.

It’s impressive geography includes terraces, ravines,snow-capped mountains and ruins once built by ancient Peruvians turning the Sacred Valley of the Incas into an ideal place for various aoutdoor activities such as mountain biking, rafting along the Urubamba river or experiencing an alternative tourism called “turismo viviencial”. 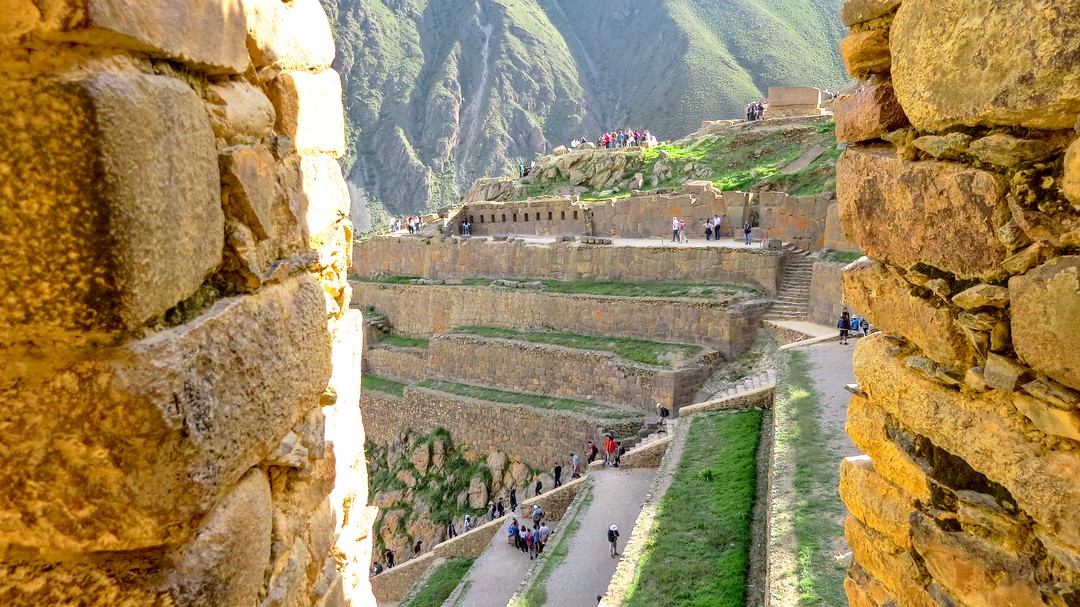 Exploring the Ollantaytambo ruins, the stop between Cusco and Machu Picchu

The religious, military and agricultural center of Tahuantinsuyo, and later the Fortress of the Incas Rebels, the city of Ollantaytambo, preserves in its structures one of the clearest examples of how it was lived during the empire’s time.

Ollantaytambo is one of Peru’s unique and surprising archaeological parks. Because of the variety of architectural types and the uniqueness of each one of them: we have not fully understood the techniques used to build huge walls, with megalithic parts that match irregular polyhedra in shape and are excellent in their finish.
Each worked stone is a work of art that is independent of the others, with different sides, angles and volumes.

How to get from Cusco to Ollantaytambo

Ollantaytambo is located at the western end of the Sacred Valley of the Incas. To get there, take the paved road that leads to Quillabamba. The village is in km. 78. The train to Machu Picchu also stops in the village.
It is located in the same district in the province of Urubamba in the department of Cusco. About 60 km. in a straight line in the northwest of the city of Cusco.

By train the Ollantaytambo Station is km. 68th
By car via Chinchero-Urubamba the distance is 75 km. On the road that goes through Pisaq, the distance is 93 km.
The mantle’s tambos were many, each singularized by a name before the word Tambo; for example Ollantaytambo, which means Tambo de Ollanta.

What to see in Ollantaytambo

In the Sun Temple: gigantic blocks of red porphyry, crafted with masterful surfaces as if it were a soft and malleable material. In which the sides of the pieces had to be joined, moldings or protrusions appeared which could fit in the furrows of the pieces with which they were assembled.
Inkapintay: It’s the whole place, including the strong took the name east, hybrid word probably assigned to the last century, the old highway forward in Choqana, which breaks the front and the last part of the orogenic spur.
Choqekillka Fort: It was another pukura or barracks of characters similar to Choqana, it is formed by districts, incomplete aqueduct, paths and short platforms.
PunkuPunku or LlajyaPunku: located at the eastern end of the town of Ollantaytambo, where the road takes the final turn. PunkuPunku means door of the doors and LlajtaPunku the door of the people.
The Avenue of the 100 Hornacinas: They call this road the current street where pedestrians and vehicles enter after passing the LlajtaPunku bend.

Remains of the long wall with many niches or cabinets, walls show no inclination towards the street, but solidify inside for support in the transverse walls building, lockers were located on the front sides of the walls and not on the street, today commented the wall to the Road and cabinets, the quality of flagstones and clay mortar.

The place MañayRaqay also called Kuychipunku; Mañay means request, raqay request, is interpreted as the Plaza de las Peticiones. This square is located on the right side of the river Patakancha, corresponding to Araqama Ayllu, a rectangular shape. The walls that bound it have many doors. On the eastern side of the square runs a small creek Patakancha arm at the center of the west wall is the large gate that allows passage into the castle.

Ollantaytambo things to do

The lively city of Inca (Ollantaytambo) is becoming a strategic place for various activities, of which we can mention:
– Outdoors: hikes through the valley, mountain biking, horse riding, paragliding, canoeing through the Vilcanota and off-road.
– Cultural experiences. Demonstration of the Andean weaving, pottery workshop, theater, dance, music, stories, Chacras routes, Peruvian cuisine, etc.

Killawasi, the restaurant owned by the hotel Sol y Luna offers a real proposal of local cuisine using fresh organic ingredients from farms in the area and the garden of the hostel. The menu was designed by the renowned chef Pedro Miguel Schiaffino and Nacho Solís, who try on their plates to reflect the value of the products of the Sacred Valley.

How can I buy the tourist ticket to enter Ollantaytambo?

The tourist ticket of Cusco can be found in tourist offices in Av. El Sol or on the Plaza de Armas in Cusco. You can buy the full or partial ticket by selecting a specific group of places you want to visit.

Note that purchasing tickets separately for each site is a higher expense.

Manco Inca Yupanqui, also known as Manco Cápac II, was one of over 500 children of the HuaynaCápac and the first of the four Inca rebels of Vilcabamba. When he fled from the armies of Atahualpa to Cusco, he worked with the Spanish conquistadors and believed to get rid of the atahualpistischen troops in this way. Although the Spaniards crowned him the Inca emperor, he did not have many privileges and was also the victim of a series of abuses and humiliations. On April 18, 1536 Hernando Pizarro dismissed him on the condition that he did not leave Cusco. Manco Inca gave him golden objects, silver bars and offered him a royal gold statue of Huayna Capac. Pizarro, who believed it, released him, but Manco Inca immediately invaded the city of Calca, where his captains were already waiting for him.

From the fortress of Ollantaytambo in 1536, the Inca rebel was only one step away from liberating Cusco from Spanish rule. It is this citadel that Manco has managed to fend off the Pizarristas’ attack and to attack the Spanish troops. Manco Inca, however, had to flee to Vilcabamba when he had to leave his troops due to the excessive wartime. He was eventually killed in 1544 when he was cheated by an almagist group.

This is a guide to the Ollantaytambo ruins in Peru, the stop between Cusco and Machu Picchu. If you have question ask them in the comments below. And don’t forget to pin this article!

Tourist Attraction: Splendid Places You Can Visit in Peru for Your Vacation

Are you looking for a place to spend quality time with your family or your loved ones? Or looking for a place in which you need to have your mind relaxed, allowing your body to recuperate? You don’t have to look far away as Peru tourist attraction presents you with an opportunity to visit the choicest places in Peru for your vacation. As it stands, the way to enjoying the best vacation is by going far miles away from home, so that you don’t have to think quickly about going home too soon from vacation. A visit to Peru today will make you consider a vacation at farther distances when next you are planning for another vacation.

Perhaps you have not stepped foot in Peru. You don’t have to be terrified by your ignorance of the places you are yet to visit. There are nice places you shouldn’t try to ignore because you think they are not fanciful places or they  notorious places: this is not the case. On this account here are eight Peru tourist attraction that you need to keep visiting for all vacations as you make preparations in advance for your trips.

Discovered by the late historian Hiram in the first quarter of the twentieth century, this spot is an attraction for visitors because of its existing broken walls that were signs of early civilization in Peru. Apart from the lost city ancient relics, the spring supplies nutrient to the agricultural terraces which make this place a spot to behold for visitors and the local people.

Uros Islands is one of the splendid places to be as you are going to witness a replica of the architectural happening of the modern world on this island. The island is basically made up of dried Totora reeds which are used to create an artificial island for the inhabitants. Moreover, the reeds are used to make homes as well as ground on the water in order to avoid the sinking of the island. Since the island is man-made, the reeds are always placed on the ground layer by layer to prevent the entire island from sinking on negligence.

This monastery is a reflection of the colonial history that the people of Peru share with their former colonial masters. Founded on October 2nd, 1580, the monastery is located in Arequipa with painted walls and the architectural Mudejar style which gives the monastery an ancient look. If you would like to have a glimpse into the history of the Peruvian people, you need to check on this location and see how history has played out itself in relation to the development of the religion of the people.

You can journey into the Amazon forest river to see the wildlife that has been preserved by nature. Also, you can enjoy a silent picnic on the river with your families or loved ones as your boat glides through the Amazon river. The best way to get into the Amazon forest in order to enjoy the isolation is by using boats or private planes. You can stock in your bags food items that will sustain you in your journey, depending on the number of days you hope to spend there.

This is an oasis town which is surrounded by sand dunes. What makes this spot a splendid place to visit is that there is a lake present in the midst of the desert to serve as a cooling spot for tourists and visitors alike. Moreover, the part that gets exciting for visitors is participating in sandboarding, which is a common game you can find amongst tourists who are out to spend a good time with their families.

This is a place you don’t want to miss when you get to Peru. The reason is that Miraflores district is an entertaining hub for various activities such as sunbathing, surfing, paragliding, clubbing and a host of other exciting activities that will make you want to stay in  Peru without remembering home for a minute. Another interesting part that will keep you entangled with your visit to Peru is the restaurant in this location which has several cuisines, prompting you to select meals that may end up becoming your favorite in the course of your long-term vacation.

The fun doesn’t end at visiting restaurants, ancient destinations or beach resorts. The Pisac market provides a good place in which tourists can shop on items such as beads, ceramics and other artistic items that are captivating to the eyes. Getting to Pisac is easy as it is a one-hour bus drive from Cusco.

On a final note, you can start making your plans towards your next vacation as you picture Peru as your next important place to visit. You rest assure of enjoying your stay in Peru, because of the therapeutic scenes which are very much covered by green habitats, a good spot for getting fresh air. There is still other Peru tourist attraction that you can visit, apart from the ones that have been mentioned above. So, visiting Peru should be seen as a good moment to revitalize your mind, as you prepared your body to reach a hundred percent capacity to function when you go back to your country.